In the year 2000, researchers in Cairo, Egypt, unearthed what they believe to be the oldest documented artificial body part -- a prosthetic toe made of wood and leather. The device, found attached to the nearly 3,000-year-old mummified remains of an Egyptian noblewoman, is a good representation of how little prosthetic limbs have changed throughout history. With the exception of very recent times, prosthetic devices have been constructed of basic materials, such as wood and metal, and held to the body with leather attachments. (source: howstuffworks.com)

With the advent of new materials and computer controlled systems, the design of prosthetic limbs has changed dramatically, and Boise-based Brownfield’s Prosthetics and Orthotics and Intermountain 3D have entered into a unique partnership that merges this new technology with extreme dedication to client satisfaction and enhanced and innovative mobility. The two companies share a common culture of curiosity, exploration, and attention to detail that inspires out-of-the-box creativity.

As the companies began working together, they started exploring different ways to use 3D imaging and 3D printing to move beyond standard prosthetic manufacturing. While carbon running blades, myoelectric hands, Bluetooth technology and microprocessor-controlled knee joints have become the new standards for prosthetic components, what has largely remained unchanged is the process to create the prosthetic interfaces; that is, the socket and the connection to the components.  First step is to create the socket, which provides an intimate fit for the residual limb.  Precise measurements and a plaster mold are taken which create a positive model.  A thermoplastic-vacuum forming process is used to then fabricate a test socket.  As the patient tries out the socket for comfort, adjustments can be made by spot heating the thermoplastic material.  The remaining prosthetic components, which will attach rigidly to the socket, are premade using traditional manufacturing methods like injection molding, machining, die-casting and other methods.

Eric Hinderager (CPO) at Brownfield’s Prosthetics and Orthotics felt there had to be a way to incorporate modern manufacturing techniques into this age-old process.  His first task was to replace the challenging manual measurement process with highly precise 3D scanning. Eric uses his stereoscopic laser scanner to take a succession of images which are merged into one surface model using sophisticated software. He then modifies the scanned model to create patient specific features for a prosthesis.

His next challenge was to find a partner who could extend the functionality of his scanned models by augmenting his designs with digital CAD and 3D printing. In connecting with Brian Hoffmann, president at Intermountain 3D, he found his perfect match in both an innovative mindset and a willingness to push the boundaries. Early projects used an iterative prototype printing process to create prosthetic donning stands and other relatively simple parts.  But the more each of them understood the other’s industry, the more new possibilities of interesting and complex projects became apparent.

Once a prosthetic limb is made, it has limited motion outside normal functioning modes, but that doesn’t always meet the needs of amputees. With Brian’s engineering background and Eric’s deep knowledge of the needs of amputees and their prostheses, they began imagining ways to increase degrees of freedom for improved function beyond basic mobility.  The first project was for an avid swimmer who could walk to the pool with his below-knee prosthesis, but was unable to swim with the foot in a standard walking position.  Eric scanned the client’s sound leg and designed a prosthesis to match it in appearance, weight and size.  Because the leg would be 3D printed in a durable nylon material as a hollow piece, Brian created an internal easy-to-use pulley system that connected the foot to a lever mid-calf.  The swimmer uses the foot in a “normal” walking position to get to the pool, then swivels the foot to a “pointed toe” position before applying his swim fin.  The client was so delighted with this solution that he asked for his swim leg to have a fish scale surface texture.  Brian designed scales directly into the CAD file before 3D printing the prosthesis, and the completed leg was hydro-dipped for the finished, scale-like appearance. 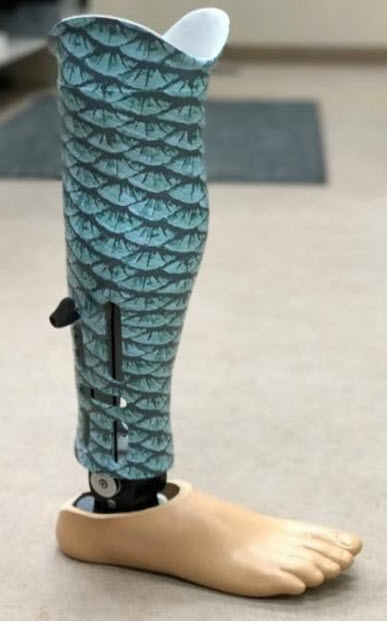 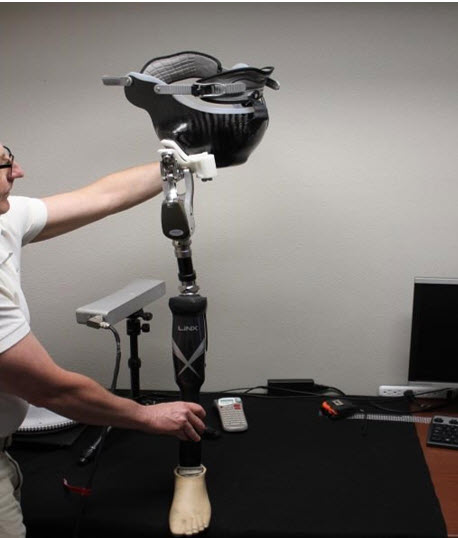 A more challenging project presented itself with a working cowboy who recently lost his leg at the pelvis from a ranch accident.  Eric created a prosthesis including a carbon socket, helical hip joint, and microprocessor-controlled knee-ankle-foot system.  The client quickly became a proficient walker; however the single-plane axis of the hip joint made for awkward positioning in his horse saddle.  Not only was it difficult to sit in the saddle, the client’s wife said she was having a hard time patching his Wranglers in all the odd places where the leg rubbed the horse and saddle! Knowing that the cowboy would need adjustable lateral hip angles for walking, mounting, and riding his horse, Brian designed a hinge to sit between the socket and the hip component that rotates and locks into place.  The hinge allows for natural hip movement while walking, but externally rotates while in the saddle.  Brian printed a few prototypes in nylon and had the client test it out.  Once the design was finalized, the hinge was 3D printed in titanium to attach easily to the prosthetic leg.

Using 3D technologies at both their respective companies, Eric and Brian together are providing new options to amputees and are helping these clients live more fulfilling lives.  The culture at both Brownfield’s and Intermountain 3D is one of openness, exploration, curiosity, and focus on the problem at hand, which allows Brian and Eric to toss ideas back and forth from their areas of expertise.  Eric is a visionary in his field, which has embraced electronics and other technology to improve micro-movements, but has largely stayed stuck in old manufacturing processes.  Brian has a deep knowledge of 3D design, reverse engineering, materials and manufacturing-grade printing which allows him to design unique solutions with new techniques.  Although each prosthesis is personalized by its nature, the design approach leveraging 3D manufacturing technologies is scalable to a breadth of projects.  It has only been by working collaboratively that the two companies have been able to imagine, design and manufacture new solutions for amputees, and deploy 21st century technologies into an ancient industry.

Please check your email for your authorization code.